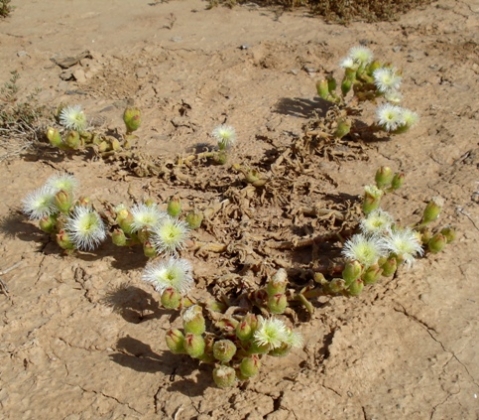 Having lost its leaves when they became submerged for too long in a puddle from recent rain, this Mesembryanthemum guerichianum plant has the resilience of a courageous amputee. Some larger Mesembryanthemum species are perennial, while several of them are only annuals.

The hollow, otherwise bare patch it calls home is inhabited by only this one resident. The plant still feeds its flowers through spreading branches linked to the receptive roots collecting sustenance. There is some green on the flower calyces, allowing some measure of photosynthesis to continue.

Enough? Metabolism may last until viable seed is set and life’s success reward has been reaped. Did it happen? Many living things go through life unobserved, their trials and tribulations of existence a totally private affair, irrelevant in the bigger scheme of things.

Humanity is a voyeur species, hooked on seeing the sights, hearing the stories. In fact, living things of all kinds observe according to their specific sensory endowment: If it lives, it needs food. If it eats, it has enemies and can be eaten.

Curiosity in humanity takes things further. In leisure it drives a preoccupation with pleasure from perception. Sought after in society as a key part of living, the wide world of seeing, sense making and sensation has been deliberately embedded in culture.

The need to see life and death of everything on earth, including its own kind, has grown institutions like theatre and opera, lifestyles of tourism and untold kinds of social gatherings and events, technologies like film, television, museums and zoos. This refined preoccupation, partly healthy, partly morbid, focuses on continually feeding the mind information about the environment, for use during the waking hours.

Entertainment starts with the senses, learning grows from using them, science depends on their effectiveness. The first step in every act of discovery is after all the dedicated observation and skilful recording for repetitions of secondary viewing.

That is why so many that stare into a flower may learn something or make a discovery. What is seen goes with what questions are formed in the mind (Smith, et al, 1998; Vlok and Schutte-Vlok, 2010; iSpot).