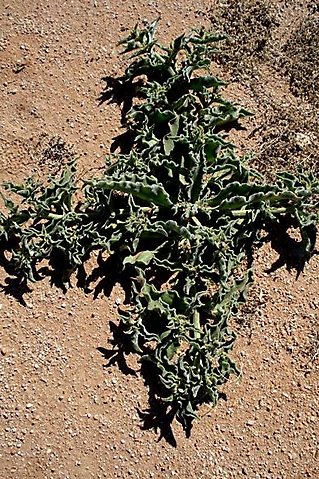 Previous
Image 5 of 42
Next

Mesembryanthemum crystallinum is a robust annual or biennial leaf succulent commonly called brakslaai (brackish salad) or soutslaai (salt salad) in Afrikaans. The roots are not thickened.

The stems have glistening, translucent outgrowths but are not winged like those of M. guerichianum. The stems grow flat on the ground forming a large, dense mat when conditions allow.

The plants produce white flowers (sometimes with some pink), growing in flat clusters. Each flower has numerous, very thin petals. The flowers close at night. Flowering happens in spring and early summer.

The species is distributed across the western half of South Africa, as well as in Africa, the Sinai Peninsula and southern Europe. It is naturalised in parts of the Americas and Australia.

The plants grow in sandy or clayey soils, coping with little rain, usually received more in winter than summer. They are often seen in disturbed areas such as along roadsides and at watering points. The species is not considered to be threatened in its habitat early in the twenty first century. On the contrary, it might cope better than much of its competition on a warming up earth (Van Rooyen and Van Rooyen, 2019; Grenier, 2019; Smith, et al, 2017; Van Wyk and Gericke, 2000; Smith, et al, 1998; Manning and Goldblatt, 1997; iNaturalist; Wikipedia; http://redlist.sanbi.org).