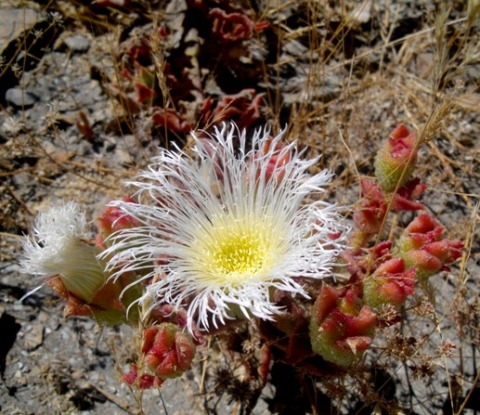 The long thin petals of the Mesembryanthemum guerichianum flower appear slightly twisted here as they struggle from the thick calyx, straightening once they’re free to spread and settle into full bloom.

The wispy, slender corolla contrasts against the robust, stubby sepals from which they had emerged. The calyx continues to hold the petals at the base until it will serve as protection for the seeds forming later in the bulge that houses the ovary. The petals ascend and spread above the multitude of stamens crowded in the flower centre. Petal tips curve downwards in the open flower of this species, while many mesembs have straight petals. The stamens and flower centre are pale yellow or cream, tinted with green below the yellow anthers.

Large bladder cells are present on the green and red bud surfaces in the photo. The buds are oblong seen from the top; the five red-tipped sepals not being identical (Smith, et al, 1998; Vlok and Schutte-Vlok, 2010).