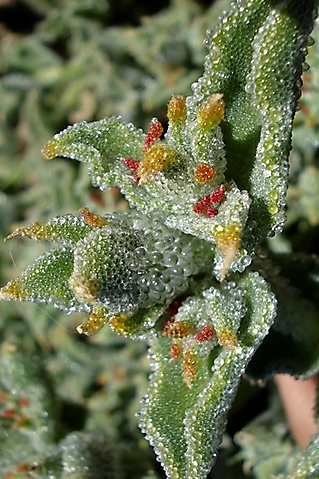 Previous
Image 8 of 42
Next

A flourishing Mesembryanthemum crystallinum or soutslaai (salt salad) stem-tip may be a colourful affair, even before any flowers appear. Its colouring is here more dazzling than the white flowers provide. Young leaf-tips may become deep yellow, orange, pale brownish or red-brown.

All this is enhanced by the glistening water cells reaching several sizes. Much of the salt accumulated in the plant is retained in these water cells. When these plants become water-stressed, it is able to switch from classic C3 photosynthesis to Crassulacean Acid Metabolism, a slower growth process occurring in several families of drought adapted plants, used when the rains stay away.

This means that the stomata through which the plants transpire moisture open at night rather than in daytime, much diminishing the water loss from transpiration. Carbon dioxide builds up at night in the cell vacuoles as malic acid, a four-carbon molecule, brought about by the open stomata.

This process is turned around in daytime when sunlight facilitates photosynthesis, the stomata close and the malic acid turns back into carbon dioxide in the photosynthetic cells, while much water is saved (Van Rooyen and Van Rooyen, 2019; Grenier, 2019; Smith, et al, 2017; Smith, et al, 1998; Manning and Goldblatt, 1997; iNaturalist; Wikipedia).