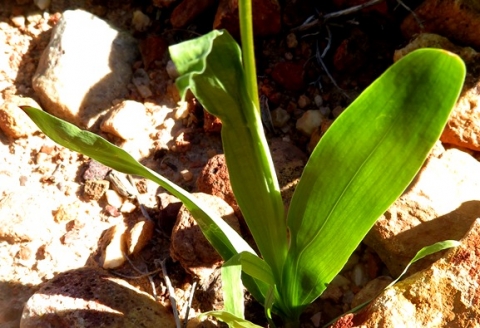 The three to seven broad, sword-shaped leaves of Ixia scillaris subsp. latifolia form a fan-shape, often in two dimensions and much shorter than the inflorescence. The outer leaves curve more laterally, the central ones in the fan straighter. Visible veins, sometimes three conspicuous ones, are parallel up the yellow-green, smooth surfaces.

In picture the leaves display size differences and some acutely pointed, tapering tips on straight, flat blades. That is the shape normally expected. There is variety here, however: a wavy tip and one that appears to be rounded, which must be a feature of the photo-angle or some fluke (Manning, 2007; Le Roux, et al, 2005; Manning and Goldblatt, 1996; Eliovson, 1990; iNaturalist).