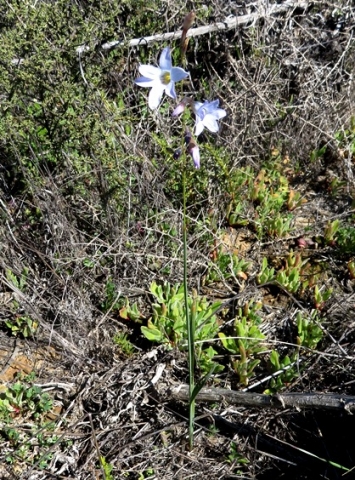 Ixia rapunculoides, commonly known as bluebells and in Afrikaans as the blou kalossie, is a cormous perennial reaching 15 cm to 70 cm in height. The corm is globose, its tunic comprised of fine, matted fibres.

The three or four deciduous, sword-shaped leaves are much shorter than the annual flower stem. The leaves have ridged midribs.

In Namaqualand this flower is common but complex and highly variable. Earlier Namaqualand varieties of the plant are no longer upheld. This South African endemic is distributed in the Northern Cape and Western Cape from Namaqualand across the western Karoo to Sutherland and southwards to Ceres and the west of the Little Karoo near Montagu. The photo was taken near Nieuwoudtville.

The habitat is clay soils in renosterveld and Karoo scrub. The species is not considered to be threatened in its habitat early in the twenty first century (Manning, 2007; Manning and Goldblatt, 1997; Eliovson, 1990; iNaturalist; JSTOR; http://redlist.sanbi.org).