Home » GENERA I-L » Ixia » Ixia scillaris subsp. latifolia, the agretjie
Back to Category Overview
Total images in all categories: 10,366
Total number of hits on all images: 5,072,031 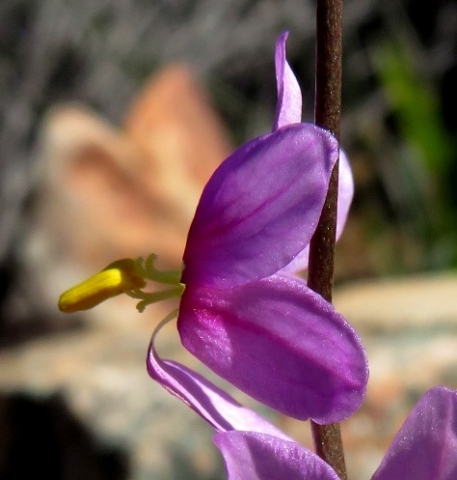 From the side, the Ixia scillaris subsp. latifolia flower displays the protruding oblongs of its yellow anthers, as well as the short white branches of its stigma, positioned behind the anthers. The lilac tepal blades are reflexed, reddish purple veins across them.

The Afrikaans name for the plant, agretjie, may be related to this view. It is derived from aigrette, the French word for egret meaning a spray of feathers. Agretjie (little aigrette) refers to an ostentatious headdress resembling the head feathers of an egret. There is also a green agretjie, Freesia viridis of the west coast. Both flowers come to mind as shapes to be featured in way-out hat design.

A hint of shiny water cells is present in picture on both the inside surfaces of the tepals and the dark coloured, smooth stalk of the spike (Manning, 2007; Le Roux, et al, 2005; Manning and Goldblatt, 1996; Eliovson, 1990; iNaturalist).