Home » GENERA I-L » Ixia » Ixia polystachya white with green centre
Back to Category Overview
Total images in all categories: 10,212
Total number of hits on all images: 4,867,590 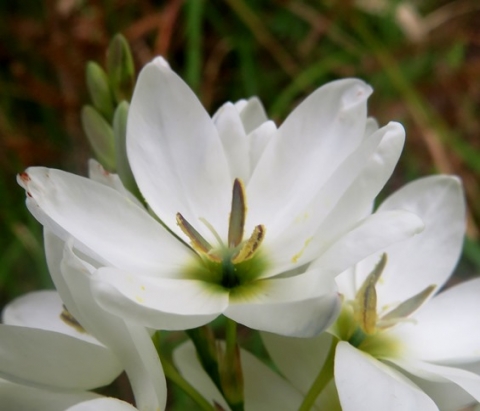 Adhering to the necessities of functional structure is another matter. Some thin, yellow-green corolla tubes are visible below the white tepal lobe cups, even some bracts around a tube base is in picture. The three banana-like anthers are spread antenna-style above the flower centre, the thinner blue-white style branches diverging in their midst.

Some Ixia species, like this one, exsert stamens and styles, while others keep them inside the corolla tubes. Insects wriggling in a confined space are proven successful as a pollination gambit, the chosen route of many flowering species.

In this case, however, another strategy has brought the species success, proven by its continued existence: Blatant deception in broad daylight works much of the time in nature, as well as in human culture. Lunch guests are conned to perform chores for food whether the kitchen is still open or not. This sounds more like modern politics than the wriggly routine of those operating in the dark of confined spaces.

Who knows what other pollination guiles have been experimented with by less fortunate, extinct Ixia plant forms, the species and aspiring ones of days gone by?

Evolution capitalises on every serendipitous success, while having no way of even noticing its continually growing billions of ongoing sacrifices. Death is such a useful fitness selection and raw material provision tool of life.