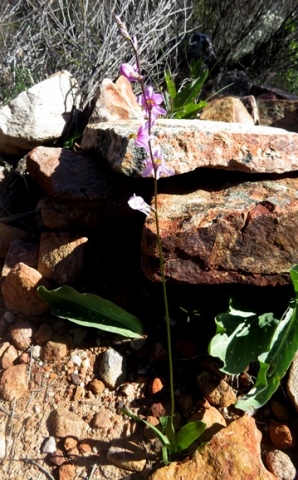 Ixia scillaris subsp. latifolia, commonly known as agretjie, is a cormous perennial growing annual, above-ground parts to heights from 20 cm to 50 cm when in flower. The corm is covered in a coarsely fibrous tunic.

Scillaris is derived from scilla or squilla (Latin) meaning sea-onion or sea-leek. Ixia was in both Greek and Latin the name for a plant also known as chameleon or chamelion, noted for its colour variability.

The subspecies is endemic to the west of South Africa, from northern Namaqualand southwards to the Western Cape as far as the Cederberg, the Bokkeveld Plateau and the Olifants River valley. This is the only one of three subspecies of I. scillaris found in Namaqualand; the other two are distributed further to the south. The photo was taken at Naries, west of Springbok.

The habitat of the subspecies is succulent Karoo and arid fynbos where the plants grow in sandy or clayey soils on rocky slopes and outcrops. The subspecies is not considered to be threatened in its habitat early in the twenty first century (Manning, 2007; Le Roux, et al, 2005; Manning and Goldblatt, 1996; Eliovson, 1990; Andrew, 2017; iNaturalist; http://redlist.sanbi.org).