Home » GENERA I-L » Ixia » Ixia rapunculoides flower
Back to Category Overview
Total images in all categories: 10,534
Total number of hits on all images: 5,183,716 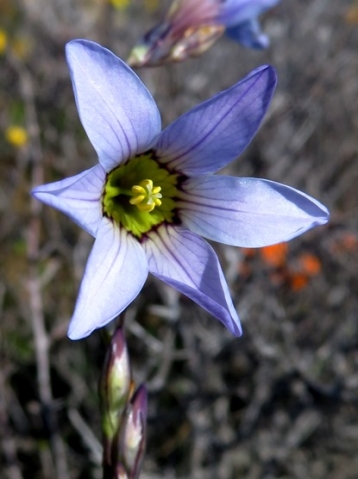 The few, small, radially symmetrical flowers of Ixia rapunculoides grow in a spiralling spike on a tall stem.

Flower colour varies from pale blue to mauve or pink, sometimes nearly white as in the photo. Inside the base of the wide, funnel-shaped tube the lower tepal parts may be yellow up to a dark, continuous line or faint ring indicated by few dots, before the upper tepal parts spread, lighter in colour. The open corolla is from 18 mm to 22 mm in diameter.

The anthers, in picture bulging yellow oblongs, cohere around the style on short filaments that allow them to more or less reach the corolla mouth. Three white stigma branches are visible above the anthers in the photo.

Flowering happens late in winter and early in spring. The photo was taken in August (Manning, 2007; Manning and Goldblatt, 1997; Eliovson, 1990; iNaturalist; JSTOR).