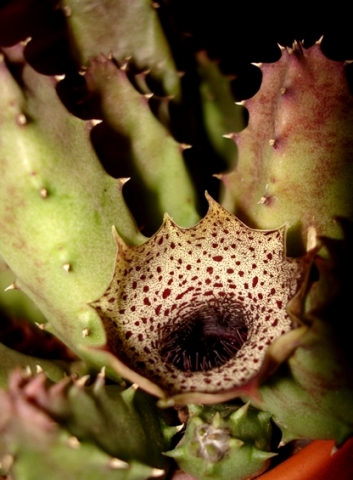 Huernia kirkii is a robust stem succulent growing four- or five-angled stems to heights around 6 cm. The plant spreads through stolons, forming clumps to 30 cm in diameter.

The stems may be semi-erect or decumbent, about 1,5 cm in diameter. Stem ridges have bulging tubercles topped by tiny, pointed teeth that become white with age. Stem colour varies in shades of green, grey and purple. Branch of the stems may occur higher up than at the base.

The secondary corolla lobes are quite large on the flower in picture, giving it an appearance of being ten-lobed instead of the usual five.

The species distribution ranges from northern KwaZulu-Natal through Mpumalanga near Barberton and Komatipoort to Limpopo. It also grows in Zimbabwe, Swaziland and Mozambique.

The habitat is scrub and grassland in shale soils. The species is not considered to be threatened in its habitat early in the twenty first century (White and Sloane, 1937; www.succulents.co.za; www.redlist.sanbi.org).