Home » GENERA G-H » Huernia » Huernia hystrix flower
Back to Category Overview
Total images in all categories: 11,506
Total number of hits on all images: 6,514,401 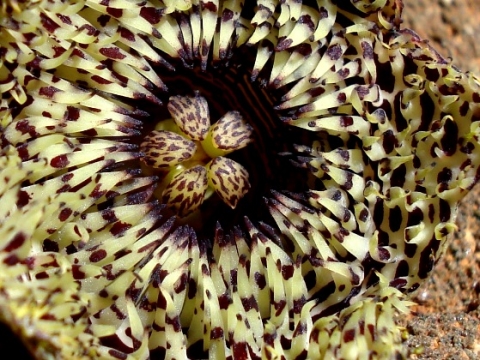 Previous
Image 9 of 56
Next

The flowers of Huernia hystrix are borne in groups of two to five, blooming in sequence. They grow on long, hairless stalks from the axils of tubercles in lower stem parts.

The flower is bell-shaped, its tube short. The five corolla lobes spread and often recurve well behind the annulus. The lobes are short and triangular, tipped with long, thinly attenuating points. Glabrous (hairless) on the outer corolla surface, the inside is densely covered in papillae, fleshy and oblong, curving in.

The colouring is pale yellow to cream marked with crimson to maroon spots. Inside the base of the corolla cup the surface is smooth, covered in transversal maroon lines. The corolla reaches up to 3 cm in diameter.

The outer corona in the flower centre is five-lobed, the lobes broad, creamy yellow and maroon-spotted. The inner corona has small, linear, erect lobes exceeding the staminal column, yellow dotted with crimson in the upper part.