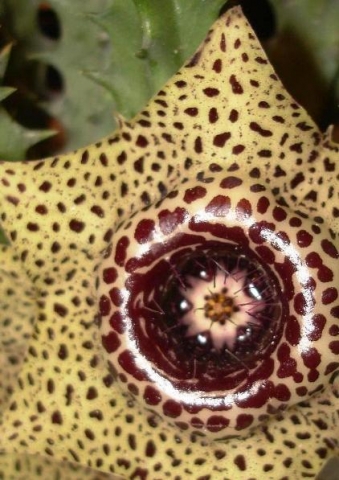 Previous
Image 6 of 56
Next

Huernia guttata subsp. reticulata has erect succulent stems branching at the base to form a clump about 8 cm tall. The flowers emerge near the base of the stems, having five pale yellow corolla lobes speckled with maroon dots. Around the corona, consisting of two components of inner flower parts, there is a prominent fleshy ring or annulus with a shiny surface.

This annulus is typical of a number of huernias, notably H. transvaalensis and H. zebrina, both resembling this plant, but having maroon stripes on their corollas and differences in the coronas.

H. guttata is widely distributed in nature. It is found from the Eastern Cape Karoo to Van Rhynsdorp in the west and northwards into Namaqualand. Subsp. reticulata occurs only in the Western and Northern Cape, while subsp. guttata is also in the Eastern Cape. Neither subspecies is considered to be threatened in its habitat early in the twenty first century (White and Sloane, 1937; www.redlist.sanbi.org).