Home » GENERA G-H » Huernia » Huernia kennedyana flowering in luxury
Back to Category Overview
Total images in all categories: 11,506
Total number of hits on all images: 6,514,042 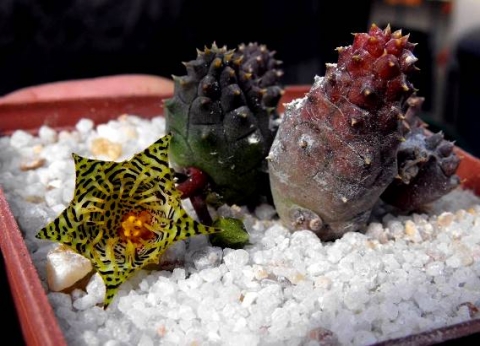 This well-cared for Huernia kennedyana indoor plant displays the full range of usual stem colours in more vivid hues than normally seen in habitat. The yellow and black corolla, undecided between tiger or leopard mimicry has parts black dotted, other parts striped.

The longest papillae on the corolla inner surface point inward from the rim of the cup where the five short lobes spread. The outer corona lobes in the flower centre are orange, about flat in the base of the corolla cup. The inner corona, smaller but more elevated, has five clubhead-shaped lobes in a ring around the staminal column.