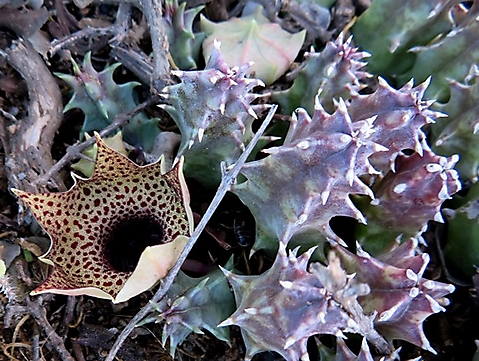 Previous
Image 5 of 56
Next

The erect stems of Huernia barbata subsp. barbata are acutely five-angled, give or take an angle on the occasionally nonconforming stem. The stems become from about 4 cm to 6 cm long and from 1 cm to nearly 2 cm in diameter.

A vertical row of triangular teeth grows along each of the angled stem ridges. The stems are blue-green when young and healthy, later dull pinkish when old or stressed, the initially neatly pointed, curving teeth later haggard with age or broken off. The teeth are about 3 mm long.

The whitish bud in the background resembles an outlandish, five-pointed hat, for now keeping its surprises under its hat.

The common plant of one region is strange or exotic in another. This is one of the key features in people’s plant selection behaviour for populating their gardens. Some seek the familiar or the pretty, others the unusual (Frandsen, 2017; Bond and Goldblatt, 1984; White and Sloane, 1937; iNaturalist; http://llifle.com).