Home » GENERA G-H » Huernia » Huernia kennedyana flower
Back to Category Overview
Total images in all categories: 11,506
Total number of hits on all images: 6,514,457 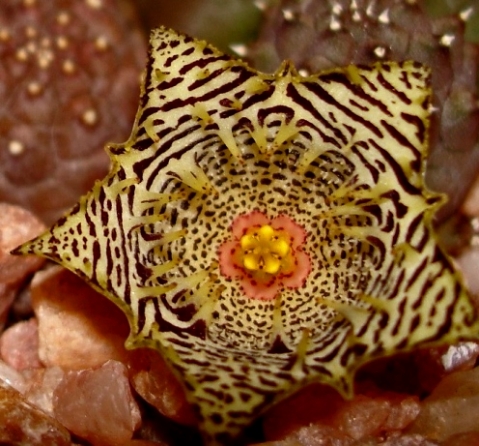 The flowers of Huernia kennedyana grow on longish, pink, fleshy stalks from the lower parts of the stems.

The flower shape is a spreading five-pointed star, shallowly bowl-shaped with fleshy papillae of variable size sparsely scattered across the corolla surface. Flower colour ranges from cream with red markings to yellow with purple, sometimes purple (almost) throughout. The dark markings are small dots in the central slightly sunken cup of the corolla, larger and more line-shaped near the lobe bases and generally variable.

There is no annulus. A flower becomes about 22 mm in diameter with short, triangular corolla lobes and tiny protrusions on the margins at mid-lobe that could be regarded as secondary lobes. A pale pink, five-lobed patch in the centre with curving margins appears to be associated with the outer corona, the inner one yellow from five rounded lobes above dull yellow lower ones, probably part of the outer corona (http://llifle.com; www.succulents.co.za).