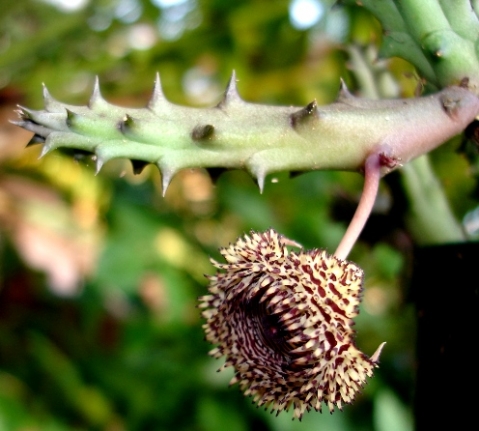 Previous
Image 8 of 56
Next

Huernia hystrix, the porcupine huernia or toad plant, is a variable stem succulent that branches into usually no more than three stems (up to five in cultivation), reaching heights between 3 cm and 7 cm.

The species distribution is in the Eastern Cape, KwaZulu-Natal, Free State, Mpumalanga and Limpopo as well as in eastern parts of southern Africa beyond the South African border. The plants are found in dry thickets.

There are two subspecies, viz. subsp. hystrix and subsp. parvula that seem to vary mainly in size, the latter being the smaller. Neither subspecies is considered to be threatened in its habitat early in the twenty first century (Pooley, 1998; White and Sloane, 1937; www.redlist.sanbi.org).