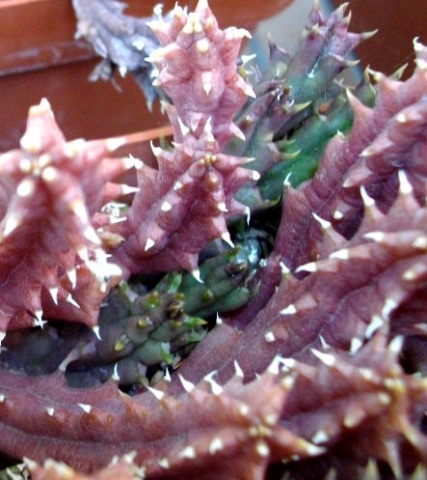 Previous
Image 7 of 56
Next

Huernia hislopii subsp. hislopii is a tropical stem succulent. The plant branches from the base, growing thin, fluted stems to 5 cm high and 1 cm thick. Stem colour is initially green, turning purple. The stems are hairless and five-angled, the teeth becoming 3 mm long.

The cream flowers, relatively large for the genus, grow solitary on pedicels of 6 cm. They have raised reddish spots and papillae on the corolla surfaces. The five large, narrowly pointed corolla lobes have small intermediate ones, like teeth, between them.

This plant is not indigenous in South Africa. It grows in montane conditions in Zimbabwe and Mozambique where it is common in some areas. It is for instance found in hills around Harare (White and Sloane, 1937; Wikipedia).