Home » GENERA G-H » Huernia » Huernia kennedyana
Back to Category Overview
Total images in all categories: 11,506
Total number of hits on all images: 6,514,027 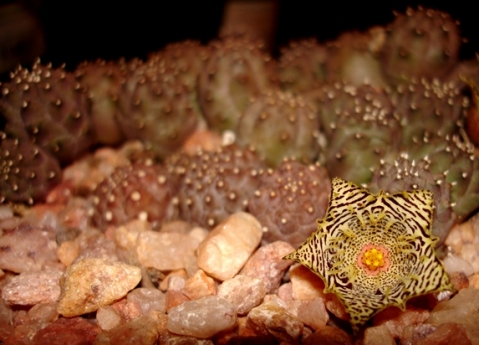 Huernia kennedyana is a stem succulent forming clumps of short stubby stems that multiply from stolons into dense mats.

The six- to eight-angled stems are thickly globular to ovoid, covered in columnar patterns of low, bulging tubercles, white-tipped from the remains of tiny bristles. Stem colour varies among shades of dull green and faint purple to grey and brown. The stems become from 2,5 cm to 3,5 cm tall.

The species distribution is very limited, occurring only in the Eastern Cape in a few sites around Cradock and Somerset East. The habitat is summer rainfall grassland on raised gravelly spots of dolerite, occasionally flats or shale ridges in rock crevices. The plants grow at elevations from 1100 m to 1500 m. This plant is rare, although not considered to be threatened in its habitat early in the twenty first century (http://llifle.com; www.succulents.co.za; www.redlist.sanbi.org).