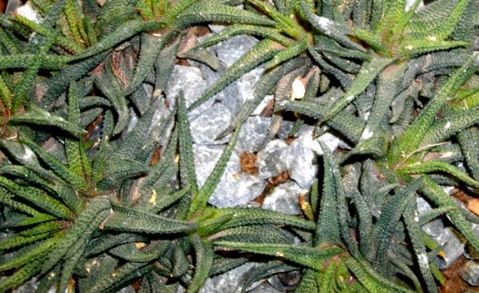 Haworthiopsis scabra var. scabra is a tough stemless leaf succulent. Its hard leaves are borne in rosettes that multiply into large clumps (40 cm wide) from suckering. The rosettes become over 5 cm in diameter and may be 15 cm tall, bearing about 14 narrow leaves that curve out when they’re older, also laterally.

The leaves become dark green, but may also be yellowish green, especially when young, reddish in drought and sometimes shiny. Leaves are usually rough on their upper surfaces covered in a dense scattering of dark tubercles. Tubercles on the lower surfaces may be smooth and join in transversal rows. The upper leaf surfaces are channelled, the lower ones convex. Leaves become 7 cm long, 2 cm wide and 1 cm thick.

The inflorescence may become 58 cm tall, sometimes branching into a small panicle. The lax raceme of about 28 cm has about 35 spirally arranged flowers, only two of which will be open at a time. Floral bracts, membranous, triangular and keeled, occur below the flower pedicels. The flowers are pinkish white with grey-green keels on their segments. Flowering happens late in summer to early fall.

The distribution of H. scabra lies in the Little Karoo from Ladismith to Baviaanskloof at elevations from 800 m to 1000 m; var. scabra is found in the east of this region. Rainfall here ranges from 125 mm to 250 mm per annum.

The plants grow in stony areas among hills and mountains, sometimes in shade of varied vegetation, but they also cope on exposed rocky outcrops. This variety is not considered to be threatened in its habitat early in the twenty first century (Vlok and Schutte-Vlok, 2010; Scott, 1985; www.redlist.sanbi.org).