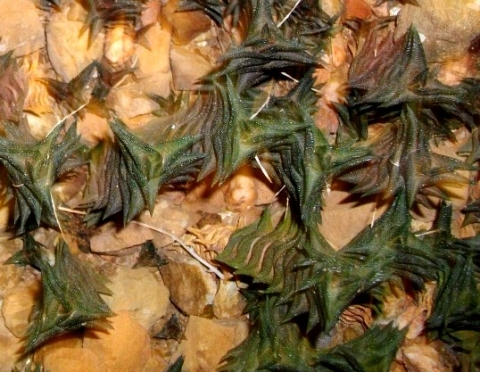 Haworthiopsis nigra var. nigra forms part of the three-tiered, Trifariae, plant group in the Haworthiopsis genus (previously Haworthia). Other plants with the particular leaf arrangement on their stems are H. viscosa and H. sordida.

The about triangular rosettes multiply slowly from stolons; a rosette becomes 6 cm wide and up to 10 cm long, although the stems sometimes remain very short. The very dark green or brown leaves sometimes deviate from the vertical tier arrangement by spiralling. Stems are sometimes partly dug into the earth, a plant manoeuvre adding protection against the elements.

The ovate leaves are channelled and attenuate to acutely pointed tips. There are uniformly coloured tubercles on both leaf surfaces. The inflorescence is about 38 cm tall, ending in a single raceme of 8 cm, carrying ten flowers of which only three will open simultaneously. Flowering happens in late spring and early summer.

The species, H. nigra, is found widespread in the Eastern Cape, its distribution extending westwards into the Western and Northern Cape. This variety is found in the eastern part of the overall range, in the Eastern Cape as far east as East London. The habitat here is a mix of grassland, Albany thicket and Nama Karoo. These plants grow on rocky ridges, cliffs or outcrops, as well as in hard, slightly acid soil of plains in the shade of taller vegetation.

Some forms of H. nigra grow extremely slowly, adding only a leaf or two per annum. The plant is not considered to be threatened in its habitat early in the twenty first century (Scott, 1985; Wikipedia; http://sun.gardenexplorer.org; http://llifle.com; www.redlist.sanbi.org).