Home » GENERA G-H » Haworthiopsis » Haworthiopsis reinwardtii
Back to Category Overview
Total images in all categories: 10,349
Total number of hits on all images: 5,049,401 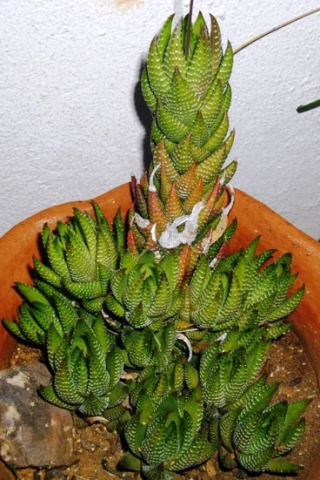 Haworthiopsis reinwardtii forms clusters or clumps, even a mat of closely grouped leaf rosettes. The plant in the picture is very busy adding more rosettes every year, having started off in this container with one stem.

The descriptive characterisation of a plant as variable is often used, especially for plants exposed to diverse conditions across the range of their geographic distributions. H. reinwardtii is truly in a class of its own in this regard. Scott (1985) in his book, The Genus Haworthia, lists no less than 25 recorded varieties plus five forms of this species when it was still Haworthia and not Haworthiopsis. The change came in 2013 when a revision created the new genus for the 18 species of the Hexangulares subgenus of Haworthia. Almost all of these plants are endemic to parts of the Eastern Cape.

The leaf tips of H. reinwardtii curve inwards, a defining characteristic. The leaves are ovate to lanceolate with the margins smooth or roughened by tubercles being present. The outer or lower leaf surface is rounded, sometimes keeled while also adorned by numerous tubercles, roughly in transversal rows. The growth habit of the plant allows old leaves to persist live, while more are added as the leafy stem lengthens. The geometric pattern is key to the plant’s appeal.

The inflorescence of H. reinwardtii may contain up to 26 flowers of which only one to four will be open on any flowering day. The small white flowers are consistent with the Haworthiopsis (and Haworthia) norms of flower structure: two-lipped, with three tepals pointing up, the other three down.