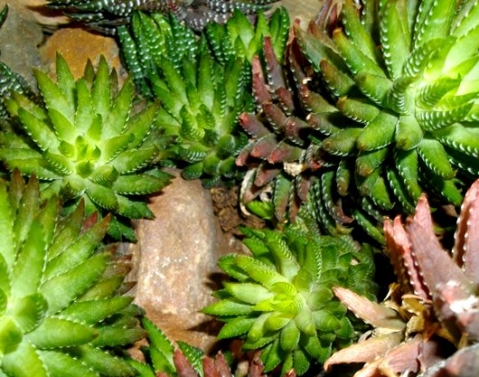 Haworthiopsis reinwardtii var. reinwardtii is one of two varieties of this species; the other one being var. brevicula. Both grow in the Eastern Cape; var. brevicula, a smaller plant with stems shorter than 10 cm and rosettes 4 cm in diameter is found near Grahamstown. Var. reinwardtii grows from Peddie to East London and Port Alfred.

The species habitat is Albany thicket. This is an Eastern Cape ecoregion characterised by dense, spiny shrubland between 2 m and 2.5 m in height. The natural impact of the biome is currently shrinking due to human presence and activities. This bush is still rich in succulent species though. Its ecological feature is high plant endemism, i.e. much speciation being stimulated by the natural challenges on the land.

H. reinwardtii grows on grassy, rocky slopes. The variety is not considered to be threatened in its habitat early in the twenty first century. Several forms of H. reinwardtii have also been described, distinguishing between the shapes, colours and sizes of the leaf tubercles (www.worldwildlife.org; www.redlist.sanbi.org).