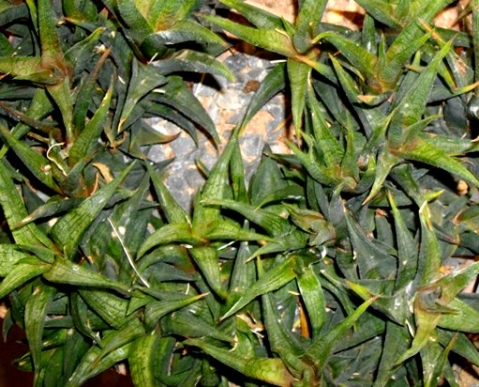 Haworthiopsis venosa, in Afrikaans commonly known as kleinkanniedood (little cannot die), is a leaf succulent. It is mostly stemless, forming clumps of leaf rosettes. A rosette may reach 10 cm in diameter, bearing about 20 leaves that ascend or spread.

The hard, dark green to brownish green leaves taper to acutely pointed tips. The leaves are lance-shaped to triangular; thickly succulent and channelled on their upper surfaces near the tips, while flat near the base. The upper surface of the leaf has about six pale green, longitudinal lines forming a reticulated pattern with small translucent windows. The lower leaf surface is slightly rounded and rough from tubercles arranged in transversal rows, mainly in the upper part of the leaf. The margins are irregularly toothed, the recurved teeth small and soft, appearing translucent. Leaf dimensions are 8 cm long by 17 mm wide and 6 mm thick.

The inflorescence may stand 65 cm tall, topped by a single, lax raceme of about 36 cm that carries about 24 spirally arranged white flowers. Up to three flowers are open at the same time; the lowermost ones first, prolonging the duration of blooming effectively. Flowering happens in early autumn.

The species distribution in the Western Cape is small, a part of the Breede River Valley between Swellendam and Malgas. The habitat is renosterveld on shale, often in rocky places and on exposed cliffs. The rare plant, its population estimated to consist of less than 1000 mature plants in nature, is vulnerable early in the twenty first century. The threats of habitat loss through crop farming, road construction and overgrazing of the veld contribute to these woes (Scott, 1985; http://llifle.com; www.redlist.sanbi.org).