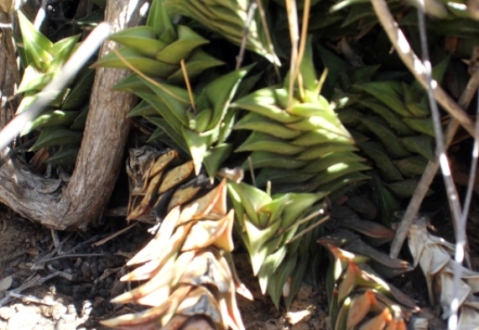 These young stems of Haworthiopsis viscosa, known in Afrikaans as koedoekos (kudu food), were seen south of Oudtshoorn in April. The hard triangular leaves, grown in three dense ranks upon the stems accentuating angularity, may multiply to stem lengths of about 50 cm. In spite of being hard, the stems are browsed, the browsers including kudu if the vernacular name means anything.

Usually brown when there is no rain, these green stems are still upright, several stalks of past flowering retained on their tips. The long stems, often procumbent, have been likened to animal vertebra; more so in shape than colour. For bones under the bushes are white.

In the bottom right of the photo, the lower part of a really old stem shows the transformation of dry leaves. Apart from being nearly white like old bones they are thin from desiccation, conveying the fact that the brown leaves still have sap (Vlok and Schutte-Vlok, 2010).