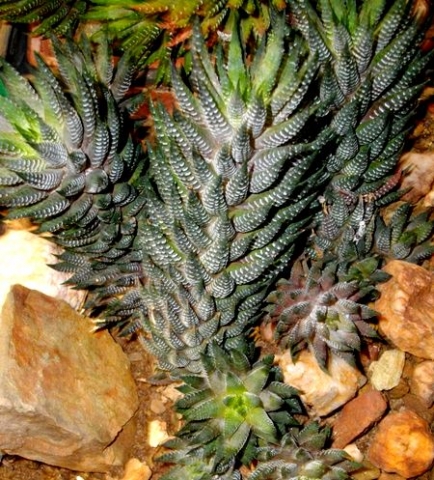 The patterns of white tubercles on these Haworthiopsis reinwardtii var. reinwardtii leaves remind of some forms of African beadwork. The plants may well have sparked the inspiration for such art.

Perimeters of living areas and clearings in the undergrowth, as well as the grassy verges of footpaths through the Albany thicket to waterholes offer glimpses of the shorter plant species in the vegetation mix, including dwarf succulents like these. Such glimpses facilitate growth in human interest. This has led to many trial-and-error, civilising experiments involving plant parts in the crafting of medicines, charms, foodstuffs, household utensils and art.

Some skills learnt along the way were clearly accompanied by harsher lessons than others, thorns presenting smaller problems than poisons. Curiosity is a human attribute split off from the older, stronger human survival trait of vigilance, such an essential attribute for coping with the dangers in the natural environment of long ago. Natural dangers have now largely been removed from cities, replaced by dangers of equal magnitude caused by people.

The curiosity component aimed at nature does survive (in some), emerging mostly when the risks of the veld are removed to a safe distance beyond fences, bars or glass. Nature on film is so much more civilised, instantly enlightening and less arduous.

An intermediate human grouping, one day probably becoming a subspecies, serves to present nature to humanity today. This entails guidance and protection of people who can pay for holiday doses of heritage. Armed with rifles, spray-cans and an ever-increasing range of sophisticated technologies these tour guides capitalise on the driving of nature from the sanitised human domain of everyday life.

Delivering their sought-after services of closeness and canned knowledge, they superficially resemble early humanity that really lived close to the nature that was. Reducing pockets of nature are moulded into commercially viable forms where the ecotourism fraternity titillate the general populace for a living.

Brief periods of unimpeded observation and memorable experiences are sold to the rich. Imposing always deeper upon the living space of the dwindling ranks of alienated “other” creatures on earth, the service is made safe, kept at arms-length for an ever-increasing fee. The market is after all continually growing as more people demand entertainment, while the natural space forever decreases, the animal numbers forever dwindling.

End-game here, say in a century or two? Devolution of biodiversity into a high-tech archipelago of zoos? Wasteland around cities devoid of most plants no longer coping with the climate? Political expediency serving the vote might eventually reduce it all to city museums and electronic records only. Or maybe the richest on earth will entertain their friends by showing the last privately owned chameleon, tortoise or Haworthiopsis.