Home » GENERA G-H » Haworthiopsis » Haworthiopsis longiana
Back to Category Overview
Total images in all categories: 10,185
Total number of hits on all images: 4,845,887 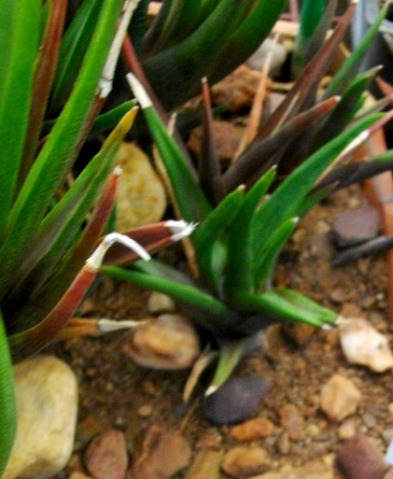 Haworthiopsis longiana is a stemless leaf succulent that grows erect leaves up to 30 cm in length, very long for Haworthia. A rosette comprises only about 30 leaves and reaches a diameter of only 5 cm to 7 cm. If it wasn’t for the hardness of the leaves and their colour, the plant might be mistaken for grass. These slow growing plants normally live about twenty years and branch from the base, but slowly and only in mature plants.

The leaves are stiff and narrow, flat or concave on their upper surfaces, convex on the lower ones and reaching about 4 mm in thickness in the midsections. Leaf surfaces are either smooth or finely covered in tubercles that are sometimes white or may form longitudinal rows. Leaf colour is dark green to bright green, the leaves becoming red-tipped in sunlight or dying back slightly.

The inflorescence becomes about 48 cm tall, bearing 40 flowers that are spirally arranged in the lax raceme. Only two to four of the white, two-lipped flowers will be open at the same time. The funnel-shaped perianth or flower tube becomes 17 mm long with green or brown lines along the keels of its segments. Flowering happens late in spring.

The species is distributed in the Eastern Province, only in the Sundays and Gamtoos River Valleys from Hankey to Humansdorp. It grows in the flats of the valleys and on lower slopes in rocky, loamy soils. The vegetation here is either Albany thicket or fynbos, the plants often sheltered under shrubs or in grass, occasionally in full sun. The species is considered to be endangered in its habitat early in the twenty first century due to agriculture. It is also grazed (Scott, 1985; http://llifle.com; www.redlist.sanbi.org).