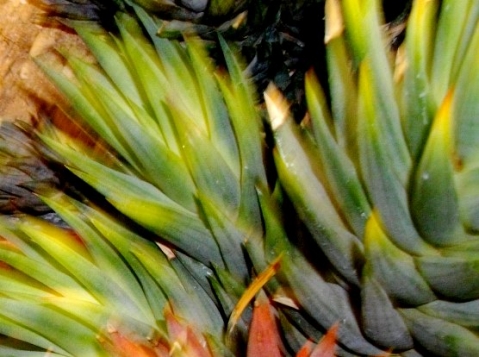 Previous
Image 6 of 26
Next

Haworthiopsis glauca var. glauca is a small leaf succulent growing stems branching at the base and forming clumps of the many-leaved, dense rosettes. A rosette may be up to 8 cm in diameter, bearing about 60 leaves, some of them retained upon the stem part below the rosette.

The leaves of this plant are hard, tapering to sharply pointed tips, spreading or curving in and keeled in their upper parts. Leaf colour is blue-green (glaucous) in the growing season (as the specific and variety names of glauca indicate), but may become red or purplish when the plant is in rest. The indoor plant of the photo has some pale, almost white parts, probably not be seen on plants in habitat. The leaf margins are entire, the surfaces smooth with faint longitudinal lines visible in the photo.

The inflorescence is usually a single raceme, rarely branching into a panicle. The greyish-white flower segments have brown keels. There are six stamens of two lengths in each flower tube; the anthers do not protrude. Flowering happens late summer and early fall.

The distribution is in the Eastern Cape from the Zuurberg Mountains near the Addo Elephant National Park to around Uitenhage. The habitat is crevices on sheer rock faces in full sunlight or in available scrubland shade, growing in well-drained sandy soil. The variety is not considered to be threatened in its habitat early in the twenty first century (Scott, 1985; www.llifle.com; www.redlist.sanbi.org).