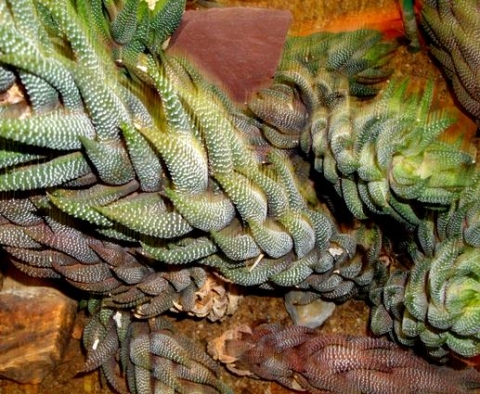 Haworthiopsis coarctata var. coarctata is a dwarf leaf succulent that forms large clumps. Its elongated stems (up to 20 cm long) are densely covered in ascending, overlapping leaves that are dark green unless turned purplish red from full sunlight. Coarctata (Latin) means crowded together.

The leaves become up to 4,5 cm long and 2,1 cm wide, tapering to acutely pointed, incurving tips. The thickly succulent leaves have small, smooth and rounded tubercles upon their surfaces. These tubercles may grow in a row along the leaf keel and more rows close to the margins.

The distribution of the variety is in the eastern region of the Eastern Province. The habitat is thicket and grassland where the plant grows among rocks or from crevices in hard, slightly acid soils. The species, H. coarctata, is not considered to be threatened in its habitat early in the twenty first century, its three varieties not yet evaluated.

A similar species, H. reinwardtii found in a more easterly distribution has larger, whiter leaf tubercles on narrower, thinner leaves. The plant described here is popular, also overseas. In Europe, it has for long been grown from seed or offsets, also hybridised with H. reinwardtii (Wikipedia; www.redlist.sanbi.org).