Home » GENERA D-F » Diascia » Diascia diffusa flower
Back to Category Overview
Total images in all categories: 10,690
Total number of hits on all images: 5,351,962 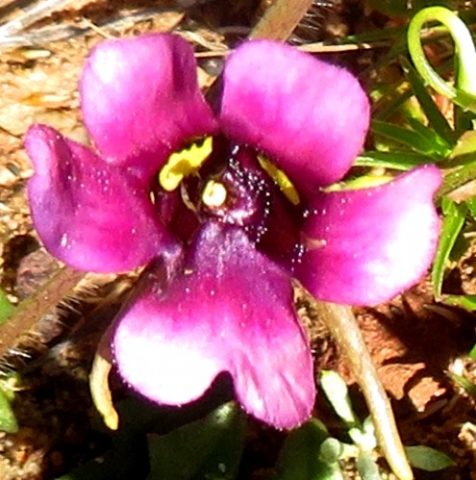 The flower of Diascia diffusa grows on a long pedicel. The reddish-purple corolla is divided into a four-lobed upper lip and a notched, one-lobed lower one. The colour is deep and glossy in the cup, paler to white on the lobes. Maybe this colour diffusion gave the species its name.

Two yellow anthers are visible here, not the yellow swelling where the hairy filaments emerge. There are four stamens, twisted around each other in two unequal pairs. Two of the filaments have swollen protrusions upon them.

The two cylindrical spurs are pale beige below the corolla. They grow at the back of the corolla from the short corolla tube.

The photo was taken on the Piketberg Mountain during August (Manning, 2007; Manning and Goldblatt, 1996; iNaturalist).