Home » GENERA D-F » Diascia » Diascia maculata back view of a flower
Back to Category Overview
Total images in all categories: 10,861
Total number of hits on all images: 5,525,071

Diascia maculata back view of a flower 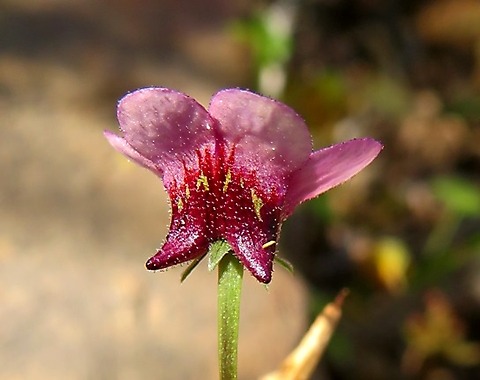 From behind, the flower of Diascia maculata in picture shows three of the five calyx lobes, reflexed by the bulging of the corolla base. The sepals taper to acutely pointed tips and each has a central groove down its flat blade.

The pair of triangularly tapering pouches (rather than spurs) on the corolla are prominent when viewing the back end of the flower. Similar to the inside, the corolla is dark at the base on the outside and on the pouches, pale in the lobed parts of the petals.

Irregular yellow markings, windows or nectar guides in the dark part of the corolla have jagged points, similar to the border between the two contrasting corolla colours.

Bees don't see red, their spectrum of visible colours shifted to the sorter wavelength side, from yellow to ultraviolet, whatever that may look like to them. Finding food and bumping into pollen more frequently are aided by yellow nectar guides occurring on many flower corollas. Other pollinators than bees, including hummingbirds, hawkmoths, and certain flies are also known to respond to nectar guides.

Short hairs are scattered sparsely on the outside of the corolla, the calyx and the pedicel (Vlok and Schutte-Vlok, 2015; Manning and Goldblatt, 2007; iNaturalist).