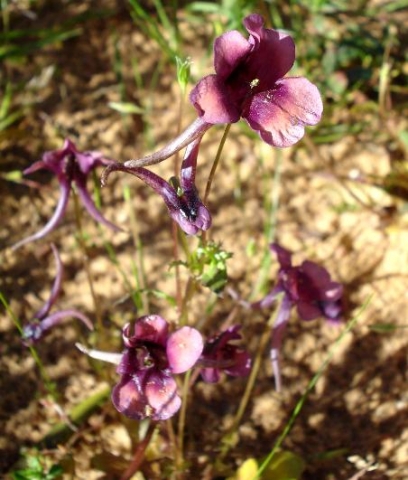 Previous
Image 9 of 19
Next

These Diascia diffusa flowers were photographed near Clanwilliam late in August. The leaves are elliptic with toothed or lobed margins. The flower colour is a range of purplish shades, all occurring on the same flower. The cup-shaped flowers are two-lipped and five-lobed with long, curving spurs. Two yellow sacs and a yellow mound are found in the flower centre, unfortunately not visible in this photo.

D. diffusa is an annual that grows to 30 cm. It flowers from late winter through spring along the west coast of the Western Cape. Found in fynbos and renosterveld in loam or sandy soil, the species has a stable population not considered to be threatened early in the twenty first century (Manning, 2007; Manning and Goldblatt, 1996).