Home » GENERA D-F » Diascia » Diascia cordata flower from the side
Back to Category Overview
Total images in all categories: 10,690
Total number of hits on all images: 5,351,918

Diascia cordata flower from the side 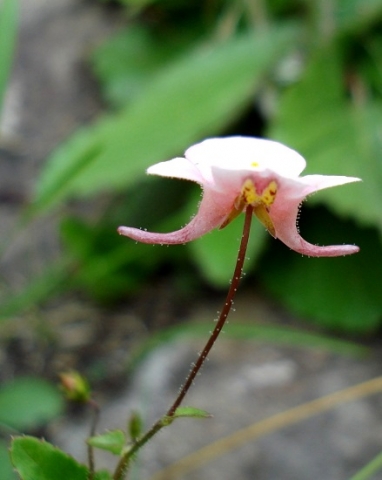 Diascia cordata grows in Lesotho and western KwaZulu-Natal near stream banks and damp places in Drakensberg grassland. The Diascia genus is represented by 70 species in southern Africa. It forms part of the Scrophulariaceae or sutera family.

In this photo the long flower pedicel can be observed, as well as the curving spurs attached to the flower tube. The faint hairiness of the corolla is also in evidence. The angle of the photo shows the petal lobes mainly sideways here, as well as the yellow marking in the centre of the upper lobes of the upper lip.

A couple of narrow, green calyx lobes are pointing downwards from the centre (Manning, 2009; Wikipedia).