Home » GENERA D-F » Diascia » Diascia capensis and Hemimeris
Back to Category Overview
Total images in all categories: 10,853
Total number of hits on all images: 5,503,354 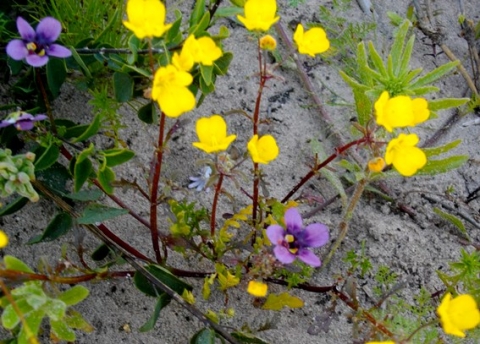 Previous
Image 6 of 26
Next

D. capensis is an erect or sprawling annual herb branching from the base and reaching 35 cm in height. It has deeply lobed leaves. The greyish purple to wine-red flowers grow on long stalks. The flower has two yellow pouches where the stamens arch down next to the deep magenta centre. Flowering happens in late winter to mid-spring.

The distribution is coastal in the far southwest of the Western Province from Clanwilliam to the Cape Peninsula and Still Bay. The habitat is sand flats, dunes and lower slopes. The species is not considered to be threatened in its habitat early in the twenty first century (Manning, 2009; Manning and Goldblatt, 1996; www.redlist.sanbi.org).