Home » GENERA D-F » Diascia » Diascia integerrima
Back to Category Overview
Total images in all categories: 10,690
Total number of hits on all images: 5,351,840 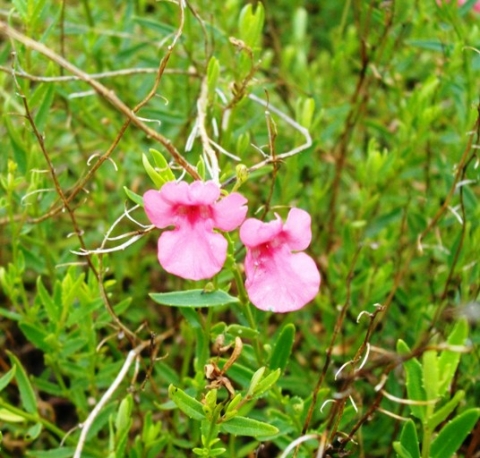 Diascia integerrima, the narrow-leaved twinspur, is an evergreen perennial herb with multiple slender, square and rigid stems and narrow leaves. The leaves are pale green, opposite and sparsely toothed. They grow mainly on the lower parts of the stems.

The name Diascia comes from the Greek: di means two, askos is sac or pouch, referring to the two spurs filled with oil found on all Diascia flowers.

The flowers appear on erect racemes in summer and autumn, usually in great profusion. The flower is light to salmon pink, has a five-lobed corolla and calyx, is darker or black on the inside of the large lower lobe or lip inside the throat. There are two downward-pointing spurs or horns at the back of the flower as is common in Diascia species. There are usually gland dots on the inside of the flower. The oil in the flowers is collected by some bee species.

The species distribution is in the Drakensberg and Maluti Mountains on cliffs and slopes among grass and rocks. The plant is cold hardy as can be expected from this habitat. The species is not considered to be threatened in its habitat early in the twenty first century.

This is a garden favourite cultivated internationally for the looks of the flowers and the duration of their blooming (www.redlist.sanbi.org; www.plantzafrica.com).