Home » GENERA D-F » Diascia » Diascia maculata
Back to Category Overview
Total images in all categories: 10,690
Total number of hits on all images: 5,351,957 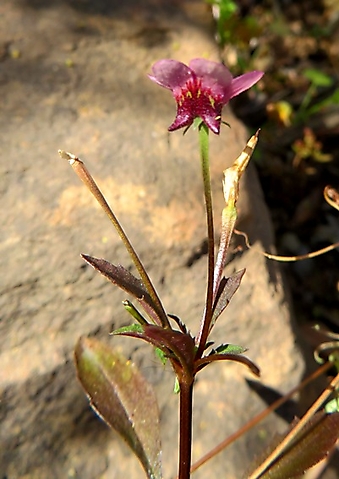 Diascia maculata, commonly twinspur or in Afrikaans korthorinkies (little short horns), is a delicate annual that reaches heights from 7 cm to 30 cm when in flower.

Most leaves and the largest ones grow in a basal tuft. The leaves are spoon-shaped to elliptic on long stalks, tapering at the base and to their pointed tips. The margins are toothed, lobed or dissected. The basal leaves become about 2,5 cm long and 1 cm wide.

The blades are leathery, the midribs sunken. In picture leaf discoloration from green to purple is strong on stem leaves, paler yellow-brown on the larger, lower one in picture.

The species distribution is in the Western Cape from the Little Karoo to Namaqualand in the Northern Cape. The photo was taken near Barrydale.

The habitat is dry fynbos and renosterveld in sandy, clayey or loamy soils. The plants often flower well after fire. The species is not considered to be threatened in its habitat early in the twenty first century (Vlok and Schutte-Vlok, 2015; Manning and Goldblatt, 2007; iNaturalist; http://redlist.sanbi.org).