Home » GENERA D-F » Diascia » Diascia maculata flower
Back to Category Overview
Total images in all categories: 10,690
Total number of hits on all images: 5,351,823 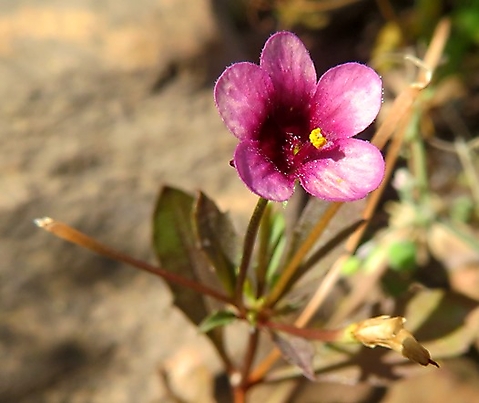 The flowers of Diascia maculata grow solitary or in small groups on long, slender pedicels from stem-tips and leaf axils. The pedicels in picture vary in colour with age.

The corolla is inconspicuously two-lipped and roundly five-lobed around a wide basal cup. The pale salmon pink, magenta or mauve petal lobe colour changes to a dark purple in the centre, usually with two yellow spots at the base of the upper lip.

The two pairs of stamens are twisted around each other, the anthers yellow.

Flowering happens from late winter to after midspring. The photo was taken in October (Vlok and Schutte-Vlok, 2015; Manning and Goldblatt, 2007; iNaturalist).