Home » GENERA D-F » Diascia » Diascia cordata
Back to Category Overview
Total images in all categories: 9,840
Total number of hits on all images: 4,460,508 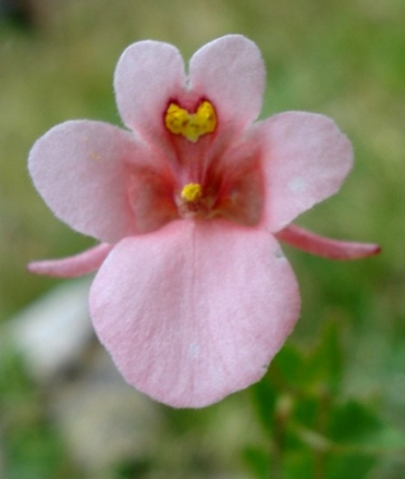 The pale pink Diascia cordata flower is two-lipped and five-lobed. The lower lip is just one large, rounded and flat petal lobe. The upper lip is four-lobed, the central two being small, rounded and joined. Just below the point where they join, a prominent and characteristic, bright yellow marking can be seen on the corolla. It is ringed by a narrow, maroon margin. The two lateral lobes, also rounded, are of a size between the upper and lower ones. They complete the darker pink central corolla cup; outside this central cup the petal lobes are paler.

There are tiny hairs on the corolla that has a slightly fleshy texture. The yellow anthers of the four stamens that are twisted around each other, are positioned inside the cup near its lower edge. The pink and thin, slightly curved spurs protrude from the back of the corolla, spreading to the sides. They emerge from the flower’s short corolla tube visible in another photo presented in this Album.