Home » GENERA A » Aloe » Aloe claviflora club-shaped flowers
Back to Category Overview
Total images in all categories: 10,174
Total number of hits on all images: 4,832,329 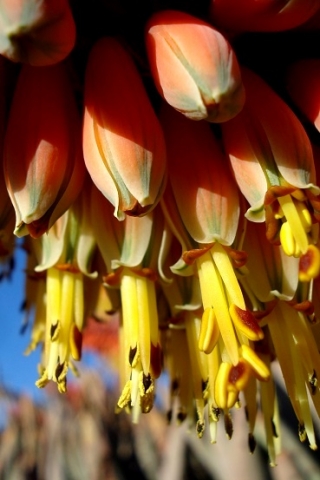 The individual flowers or perianths of Aloe claviflora start off fairly red once the maturing buds discard their initial green colour, to turn gradually paler again in their last phase.

Once they open, some creamy yellow creeps in, to be followed by whitish ivory after pollination. Near the segment tips some green lingers in the centre of each segment. The perianth tubes deviate from cylindrical by being somewhat trigonous or three-angled. The inner three segments comprising each perianth are broader than the outer three and have white margins. Segments taper gradually into their pedicels, helping to accentuate the club-shape, the club’s head being near the mouth. The clavate shape (club shape) of the perianths that gave this Aloe its specific name of claviflora is evident in the flowers hanging down in the raceme in picture.

The tips of the stamens are far exserted by the filaments growing longer than the perianth segments, forcing the buds open. Segment tips curve outwards after this force had been applied to them. The anthers appear black when just emerging, swelling out into the yellow lobes that later become a shiny translucent brown. The inner three stamens are thinner, growing long first to present their pollen, followed by the outer three, thus prolonging the period of offering viable pollen. The thin whitish style may also be discernible among the stamens here (Reynolds, 1974; Jeppe, 1969).