Home » GENERA A » Aloe » Aloe claviflora, a plant given many names
Back to Category Overview
Total images in all categories: 10,683
Total number of hits on all images: 5,344,393

Aloe claviflora, a plant given many names 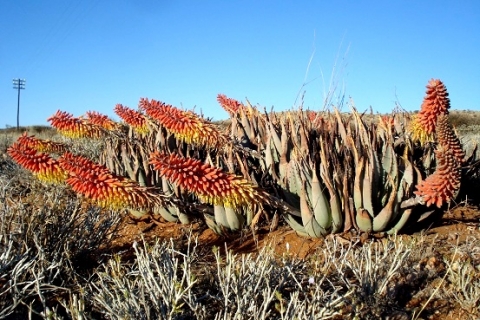 Quite a sight, Aloe claviflora in full bloom! Apart from the kraal aloe or kraalaalwyn common name on account of the ring growth of rosettes as the central ones die off, the plant has acquired further Afrikaans names from the local people who know it:

Aanteelaalwyn (breeding aloe) relates to the dividing of rosettes and suckering that creates the kraals of clumped rosettes, the young ones tilting outwards, always being added on the outside around the oldest one in the centre.

Laeraalwyn (encampment or laager aloe) refers to the same feature.

Kanonaalwyn (cannon aloe) comes from the angled racemes that can be observed in the photo. The direction of the angle seems to favour the sun, racemes at the “back of the ring” tend to attempt redirection, ending up pointing upwards and extending the flowering season by opening later.

While the angle of a cannon barrel is determined by the distance to the target, it is not quite clear why some of these racemes sag to almost horizontal positions. In the land of the living willpower often tests gravity (Reynolds, 1974; Jeppe, 1969).