Home » GENERA A » Aloe » Aloe chabaudii inflorescence
Back to Category Overview
Total images in all categories: 10,342
Total number of hits on all images: 5,039,739 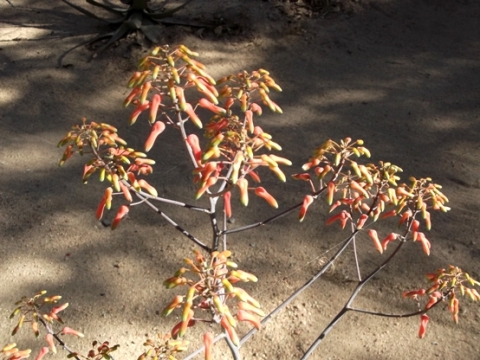 The inflorescence of Aloe chabaudii is a loosely spreading panicle with about six to eight ascending branches and 20 conical to cylindrical racemes. Perianth colour is normally scarlet to brick-red in the southern part of the plant’s geographical distribution, i.e. South Africa and Swaziland.

This specimen, photographed in the Sabie region in July, had much orange on its developing green-tipped buds. The base of the perianth is swollen while markedly narrowed above the ovary. This feature is similar to flowers of some of the spotted aloes.

The inner three stamens are exserted before the outer ones, increasing the duration of the period during which viable pollen is presented. The stigma is also exserted about 2 mm (Reynolds, 1974; Jeppe, 1969; Van Wyk and Smith, 2003).