Home » GENERA A » Aloe » Aloe comosa early inflorescence
Back to Category Overview
Total images in all categories: 9,976
Total number of hits on all images: 4,685,551 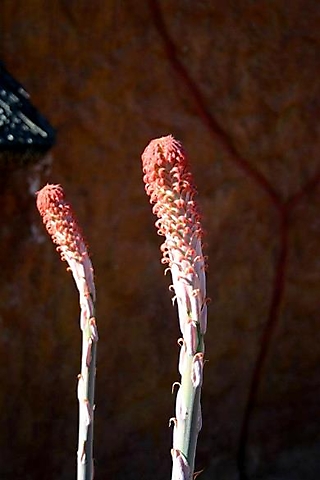 The tall inflorescences of Aloe comosa grow mostly unbranched from the leaf rosette, from three to five of them simultaneously. The occasional raceme may have up to five small branches near the base.

The slender inflorescences reach from 2 m to more than 2,5 m above the rosette. This means that an old, long-stemmed plant in flower may stand up to 5 m tall.

The inflorescence starts off with the buds hidden, pressed against the stem, pointing up as in the photo. The visual effects are at this stage presented solely by the deep pink bracts, recurving and densely imbricate to the blunt, tufted inflorescence tip. Lower down the spaced, colourless or beige, sterile bracts are bigger, broad-based but also roundly recurved at their acutely pointed tips. The specific name, comosa, is a Latin word meaning hairy, referring to these bracts that dominate in the early flowering stage.

Open flowers in the narrowly cylindrical raceme are dusty pink, turning ivory or creamy pink after pollination. Bicoloured racemes of open flowers are more common than unicoloured, pink ones. The pedicels of the lowest flowers are up to 2 cm long, curved in their upper third. The perianths (flower corollas) are pendulous before they open. This is when they become pressed against the central axis, the peduncle for a second time, on this occasion pointing down.

The inner three anthers at the tips of flattened filaments are exserted first, later the outer three, followed by the style tip, the stigma. The green ovary is 9 mm long, six-grooved down its sides.