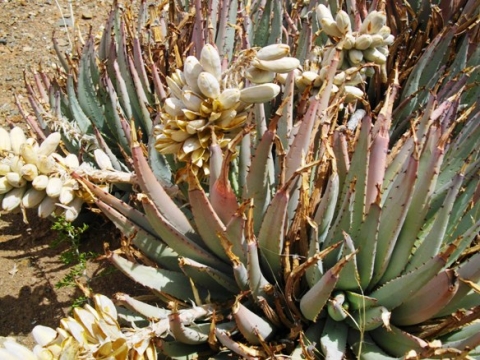 Aloe claviflora is a multi-stemmed succulent, although the stems are short, every rosette positioned at ground level. Claviflora means club-shaped flowers.

The clumps form rings when the continual addition of new rosettes through division and suckering on the outside of a clump is matched by the oldest, central rosettes starting to die off. These rings of obliquely outward leaning rosettes around the central open patches (or sometimes semicircles from mishaps befalling some of the rosettes in the ring over the years), are the “kraals” referred to in the Afrikaans name of kraalaalwyn (kraal aloe). Rural farmers in the part of the world where A. claviflora grows, all used to have kraals for keeping livestock safe at night.

The sickle-shaped leaves, blue-green to pale pinkish in colour, have a thick, rough texture. Sharp, dark prickles grow along the leaf margins and keels. The healthy, young leaves at the start of the dry season already have dry leaf-tips in the arid environment where the plants live.

The species distribution is inland in the Great Karoo of the Northern Cape, Western Cape and Eastern Cape, as well as in the western Free State and Namibia. This photo was taken near Beaufort West where the plant in picture had produced much seed by late October and is in the process of releasing it.

The plant's habitat is Nama Karoo and savanna, arid and semi-arid areas on calcrete where the plants grow on stony flats and rocky slopes, also along thornveld margins. The species is not considered to be threatened in its habitat early in the twenty first century (Van Wyk and Smith, 2003; http://redlist.sanbi.org).