Home » GENERA A » Aloe » Aloe chortolirioides var. woolliana
Back to Category Overview
Total images in all categories: 10,342
Total number of hits on all images: 5,039,965 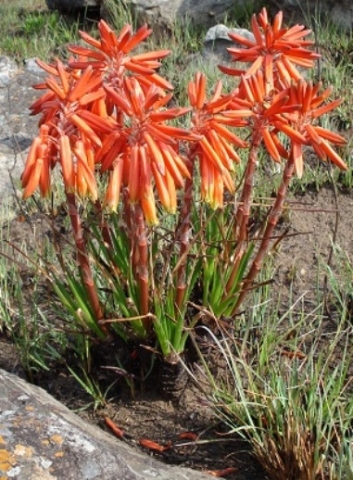 The specific name is derived from Chortolirion, another southern African genus of the Asphodelaceae family, on account of resemblance. The Greek word chortos means pasture and leirion (also Greek) means lily.

The species distribution is along the escarpment in Limpopo and Mpumalanga at places like Kaapsche Hoop, Tafelkop, Sabie and Ohrigstad, also in Eswatini.

The habitat is summer rainfall grassland often covered in mist during summer, the plants often among rocks and on cliffs. The variety is not considered to be threatened in its habitat early in the twenty first century, although forestry impacts strongly on the land where it grows (Craib, 2005; Van Wyk and Smith, 2003; Jeppe, 1969; Wikipedia; http://redlist.sanbi.org).