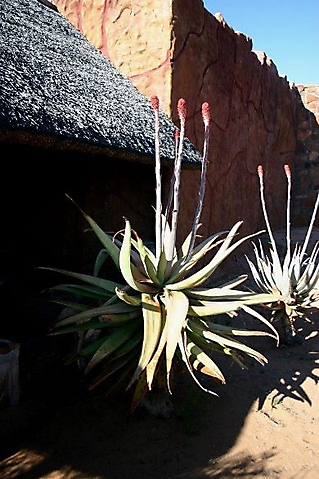 Aloe comosa, commonly the Clanwilliam aloe, is a single-stemmed leaf succulent reaching rosette heights of 2 m (SA Tree List No. 28.7). Old leaves persist, dry and brown below the leaf rosette. They cover the stem, although not always quite to the ground.

The species distribution is range restricted, near the west coast in the Western Cape and slightly into the Northern Cape. The plants grow in the Clanwilliam and Vanrhynsdorp districts, but also elsewhere in the Olifants River Valley, the Lower Bokkeveld, the eastern Cederberg and into the Tanqua Karoo towards Calvinia. The photo of a plant in cultivation was taken at Kagga Kamma, within the geographical range of the species.

The habitat is rocky slopes and flats in hot, dry summer and frost-free, winter rain conditions. The plants occur mostly at elevations from 300 m to 600 m. Colonies of these aloes are common in habitat, somewhat threatened by development and plant collectors. Still, the population is stable and the species not considered to be threatened in its habitat early in the twenty first century (Reynolds, 1974; Van Wyk and Smith, 2003; Jeppe, 1969; iNaturalist; http://redlist.sanbi.org).