Home » GENERA A » Aloe » Aloe comptonii in flower
Back to Category Overview
Total images in all categories: 9,976
Total number of hits on all images: 4,685,543 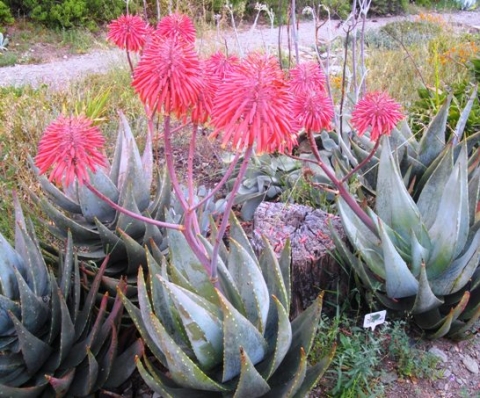 The inflorescences of the Aloe comptonii plants seen here are branched into multiple racemes (usually from three to eight of them). These racemes are densely flowered, short and somewhat conical (typical form of flowers in the east) to rounded (as they grow in the western part of the plant's distribution).

The flowers in picture are slightly pinker than the familiar red or scarlet that contrasts so well with the grey shrubbery of the Uniondale area. According to Reynolds the "purest" form of the species, defining the type, are found a few kilometres north-east of this town. The flowers in the photo appear quite similar to those of A. perfoliata, the species with which A. comptonii merges in the western extreme of its distribution area. But the leaves here still suggest A. comptonii characteristics.

The perianths or individual flower corollas are thin, slightly curved and three-angled or trigonous. The faint yellow colour at the open mouths of the lowest perianths can just be discerned at the bottom of some racemes here. Flowers of the Asphodelaceae family (and the lilies from which Asphodelaceae has been split off), open like this, all starting to open from the lowest ones.

The comptonii specific epithet was bestowed on this plant in honour of Prof. R.H. Compton, past Director of the Kirstenbosch National Botanical Garden. He was responsible for splitting this species from A. mitriformis that previously was A. parvispina (Van Wyk and Smith, 2003; Reynolds, 1974).