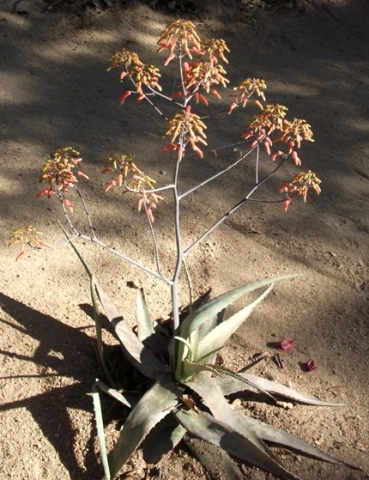 The form of Aloe chabaudii found in the eastern parts of the Limpopo and Mpumalanga as well as in northern KwaZulu-Natal and Swaziland is sometimes called A. chabaudii var. chabaudii. Two other forms, viz. A. chabaudii var. mlanjeana (Malawi) and A. chabaudii var. verekeri (Zimbabwe) have also been recorded. Variability of these plants does occur across the overall distribution of A. chabaudii, raising questions about the recognition of varieties.

The leaves of mature plants are sometimes broader and more upturned than these in the photo. There are usually about 20 leaves per rosette. The leaves are up to 10 cm wide low down on their tapering structure. Leaf colour is grey-green to glaucous. Few or no leaf spots are typical of mature plants.

A. chabaudii plants are stemless, forming clusters from suckering. Heights around 75 cm are achieved including the inflorescence (Reynolds, 1974; Jeppe, 1969; Van Wyk and Smith, 2003).