Home » TYPES » Trees » Albizia forbesii
Back to Category Overview
Total images in all categories: 11,528
Total number of hits on all images: 6,610,329 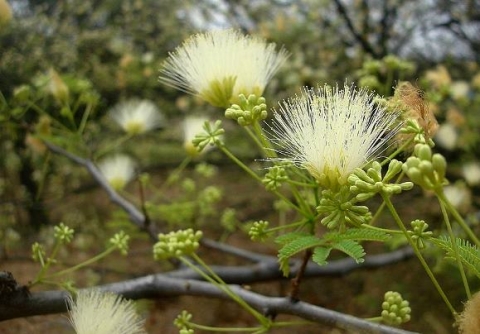 Albizia forbesii, commonly the broad-pod false-thorn, is a deciduous tree growing branches from low down around a single stem, becoming from 10 m to 20 m tall (SA Tree List No. 154). The somewhat drooping branches in and below the spreading crown appear untidy.

The bark is smooth and pale to dark grey becoming somewhat rough with age from fissuring. Young branches are grey with silvery or velvety hairs. Lenticels are usually seen but no spines.

The alternate, bipinnate leaves growing on short side-branchlets have two to seven pairs of pinnae that bear six to fourteen small oblong leaflets. The oblong leaflets with rounded or pointed tips are close together and dark green on top. Lateral veins are sometimes prominent below.

The leaflets in the pair at the end of the pinna are obovate in shape. Leaflets may be hairy on the lower surface along their midribs. There is no terminal pinna and no terminal leaflet. Leaflets become about 9 mm long and 2 mm wide. Old leaves turn dark yellow before they fall. The rachis becomes up to 4 cm long, the hairy petiole up to 2 cm, bearing a gland.

The species is distributed in the far northeast of South Africa, in the Maputaland part of KwaZulu-Natal and the eastern Lowveld parts of Mpumalanga and Limpopo. It also grows in Swaziland, Mozambique, Zimbabwe and Tanzania, maybe further.

The habitat is streams and river banks where small groups may form among thorny scrub, arid woodland, bushveld and forest margins in deep, sandy soil. The species is not considered to be threatened in its habitat early in the twenty first century.

Elephant and antelope browse the leaves and twigs. Local people use the wood for carving and the roots for averting the tokoloshe. The tree grows easily from seed. It was named after John Forbes, a naturalist who died of malaria by the Zambezi River at the age of 25 in 1823 (Coates Palgrave, 2002; Schmidt, et al, 2002; Van Wyk and Van Wyk, 1997; Pooley, 1993; iNaturalist; http://redlist.sanbi.org).