Home » TYPES » Trees » Albizia harveyi leaves
Back to Category Overview
Total images in all categories: 11,544
Total number of hits on all images: 6,627,327 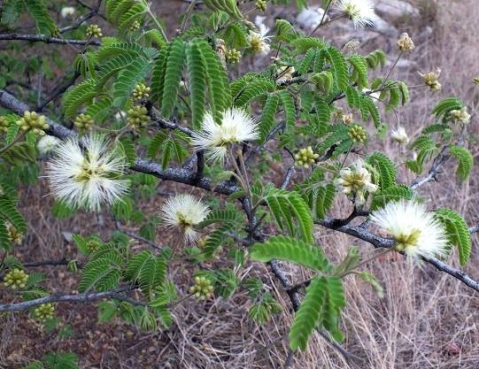 The alternate leaves of Albizia harveyi are bipinnate without a terminal pinna. The hairy petiole is 1 cm to 3 cm long, a gland usually present in its upper half. The rachis or stalk between the pinnae is 2,5 cm to 9 cm long with a hook at its end.

The leaves appear feathery, often covered in golden hairs, while sometimes glabrous (hairless) when mature. Up to 18 pairs of pinnae per leaf bear 12 to 28 pairs of leaflets that are small, narrow and asymmetrical, i.e. sickle-shaped and sharply pointed.

Lateral veins in the leaflet blades are raised on the lower surfaces. The leaflet is 4 mm to 6 mm long, its midrib to one side of the blade.

The leaves are similar to those of A. brevifolia which bears only six to ten pairs of pinnae and straight leaflets. A. amara has leaflets about four times as long as the ones here (Coates Palgrave, 2002; Schmidt, et al, 2002; Van Wyk and Van Wyk, 1997; iNaturalist).