Home » TYPES » Trees » Albizia anthelmintica
Back to Category Overview
Total images in all categories: 11,442
Total number of hits on all images: 6,209,933 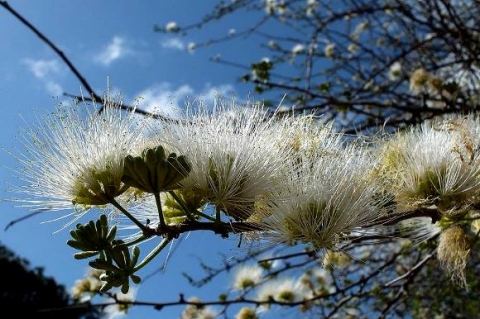 Albizia anthelmintica, commonly known as the worm-cure albizia or worm-bark false thorn and in Afrikaans the oumaboom (grandmother tree) apart from several other names, is a multi-stemmed, deciduous shrub or tree of about 2 m to 5 m in South Africa, a single-stemmed tree of up to 10 m in Namibia (SA Tree List No. 150).

The bark is pale to dark grey or red-brown, smooth to rough and longitudinally fissured. Small branches often have spine-tips and spine-tipped side-shoots.

The leaves are bipinnate, bearing two to four pairs of pinnae, each with two to four pairs of leaflets. The stipules are small, often hardened. There is no terminal pinna or leaflet, but usually a downward-pointing hook at the rachis tip. Leaflet shape is obliquely obovate to nearly circular, sometimes narrowly elliptic and from 10 mm to 35 mm by 4 mm to 25 mm in size.

Leaflet colour is pale green or dark green to blue-green, hairless to downy on top and showing prominent veins below; quite variable across regions. Leaflet margins are entire. The leaf petiole is from 5 mm to 20 mm long with a gland halfway up its length or near the lowest leaflets.

The leaves resemble those of Senegalia mellifera, but the tree lacks the thorns.

The species distribution is mainly in Mpumalanga and Limpopo, also in North West, the Northern Cape and KwaZulu-Natal, but a much larger distribution exists widespread in tropical Africa.

The habitat is diverse across the large geographical distribution, sometimes bushveld and thicket, but it does not favour any particular vegetation or other factors and may be the only tree in harsh African climate regions. The species is not considered to be threatened in its habitat early in the twenty first century.

The roots and bark are used medicinally, especially in treatment of tapeworm. The specific name resembles the word anthelmintic that means a medicine used to destroy parasitic worms. The bark is also used in basket weaving. The leaves are browsed by goats and antelopes.

The wood is durable, the heartwood reddish, sometimes used to make small utensils. The tree is grown from seed; hard to transplant due to its long taproot (Mannheimer and Curtis, (Eds.), 2009; Coates Palgrave, 2002; Van Wyk and Van Wyk, 1997; Pooley, 1993; iNaturalist; http://redlist.sanbi.org).